The playwrights listed here are those with at least one play translated into English. Numerous other 19th century Armenian writers published plays which have not yet been translated into English. This body of untranslated work includes plays by Vahan Totovents (1894-1938), author of the lyrical memoir Scenes from an Armenian Childhood; Mkrtich Pesiktaslean (1828-1868), one of the founders of the Armenian theatre of Constantinople who wrote dramas in both classical and modern Armenian; and Tovmas Terzean (1840-1909) who wrote the libretto for the first Armenian opera, Arshak II, which remains in the opera repertory today. The Armenian Dramatic Arts Alliance will strive to commission new English translations of selected plays.

Source: A Reference Guide to Modern Armenian Literature, 1500-1920, compiled and with an Introduction by Kevork Bardakjian (Detroit, 2000). 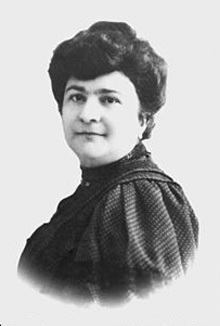 Zabel Asadour
Zabel Khanjian, later Zabel Asadour, was born on July 23, 1863 in Scutari, a suburb of Constantinople, and educated in local French and Armenian schools. In 1879 when she was 16 years old, she joined with eight school friends to form the National Armenian Women’s Union which helped to establish girls’ schools and orphanages in the Armenian provinces. She became a well-known teacher and proponent of education, publishing with her husband, Hrand Asadour, a series of highly acclaimed Armenian language and literature textbooks. She also wrote journalism, fiction, and poetry under various pen-names including “Sybil,” “Anahit,” and “Miss Alice.”

Her publications included novels such as True Feminism and A Girl’s Heart; a short story collection, Women’s Souls; and a volume of poetry, Reflections. The composition dates of her plays are uncertain. She died on June 19, 1934. Four years later, Hairenik Press in Boston published the Armenian version of her play The Bride, a lively comedy about a bride from the country who moves into her husband’s comfortable home in the big city but refuses to accept the traditional posture of submission to her mother-in-law’s authority. The Bride was first performed in English in 1986 at the Diocese of the Armenian Church in New York. 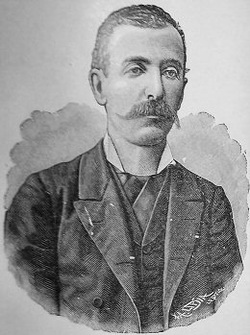 Hagop Baronian
Hagop Baronian was born in 1843 into a poor family in Edirne (Adrianople) and left school early in order to find a job. Moving to Constantinople in 1864 where the first Armenian professional theatre company had been founded just three years earlier, he began acting and writing satires and comedies. Strongly influenced by Molière and Goldoni, he adapted Goldoni’s A Servant of Two Masters as his first play (1865). During these years Baronian also worked at various jobs, taught himself French and Italian, and contributed to periodicals.

Although he became well known as a satirist of politics, economic institutions, changes in urban Armenian society and sexual mores through a stream of plays and other writings, he never saw any of his plays staged during his lifetime, in part due to the ban placed on Armenian theatre productions by Sultan Abdulhamid II. Baronian struggled to support his large family by working as an accountant and journalist, serving as the editor and/or publisher of a number of periodicals during the 1870s and 1880s. Honorable Beggars (1880), his best-known work, was written as a novel and later adapted to the stage. Baronian died of tuberculosis in Constantinople in 1891. In subsequent years his plays became very popular. 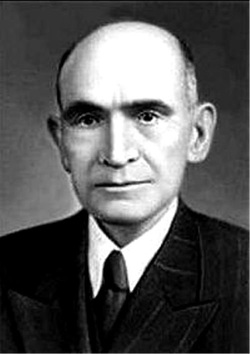 Derenik Demirchyan
Poet, novelist and translator as well as playwright, Derenik Demirchyan was born on February 6, 1877, in Akhalkalaki in what is now southern Georgia. After completing his schooling in Tiflis, he became a member of the Armenian literary group Vernatun (Upper Room), so named because its members met in the 5th floor residence of poet Hovhannes Tumanian. Demirchyan published his first book of poetry in 1899. He attended the University of Geneva from 1905 to 1909, and then after some years in Tiflis settled in Yerevan in 1925.

During the 1920s several of his plays were produced, most notably Nazar the Brave, a rags-to-riches comedy about a folkloric figure which is based on a collation of over 60 sources by the poet Tumanian. Described by Demirchyan as a play for “childlike adults and adultlike children,” Nazar the Brave was first performed in 1924. It was subsequently given professional productions in Yerevan, Tiflis and Baku, made into an opera and later a film (1940). From the mid-1920s, in addition to writing plays, Demirchyan began writing and publishing in other prose genres, including short stories, novels, and children’s stories. He was also known as a translator from the Russian; his translation of Gogol’s Dead Souls is especially esteemed. Demirchyan continued to work and publish up until his death in 1956. In 1980, the Derenik Demirchyan State literary prize for prose was established in Soviet Armenia. 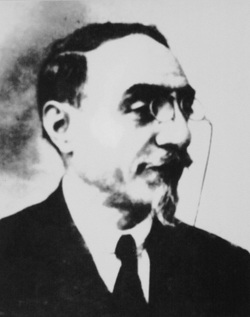 Levon Shant
Levon Shant is regarded by many as the greatest Armenian playwright. His plays The Emperor and Ancient Gods remain among the most frequently staged Armenian dramas. Born in 1869 into the wealthy Seghbosian family of Constantinople, Levon was orphaned at the age of six. He made his debut as a writer in 1891, writing essays and poetry at first and then short stories and novels, adopting Shant (lightning bolt) as his pen-name. After attending various universities in Germany, he moved to Paris in 1899 where he got a job as the business manager of a theatre and first began to write plays. Returning to the Caucasus, he joined Vernatun (Upper Room), an Armenian literary group in Tiflis, with whose support his first plays were published and performed. His symbolist drama Ancient Gods (1908) revolutionized the Armenian literary world when it made its debut in Tiflis in 1913.

Translated into German, Italian, French, and Russian, it was directed by Stanislavksy in 1917. Shant’s royalties from Ancient Gods allowed him to return to Europe in 1913, thus escaping the fate of his colleagues who were killed in the Armenian genocide of 1915. Remaining in Europe for most of the next five years, Shant returned to Yerevan to serve as a Member of Parliament in the short-lived Armenian Republic (1918-20), and was imprisoned following the establishment of the Soviet regime in Armenia. When he was freed by an underground movement that liberated hundreds of prisoners in 1921, he fled to Teheran. Subsequently Shant wrote only two more plays, including The Princess of the Fallen Castle, and devoted his energies to founding the Hamazkayin Cultural Foundation and the Armenian Academy of Beirut, where he was the principal until his death in 1951. Meanwhile Shant’s plays had been banned by the Soviets. But since the dissolution of the U.S.S.R. in 1991 and Armenian independence, his plays have returned to the boards with the acclaim that is their due. 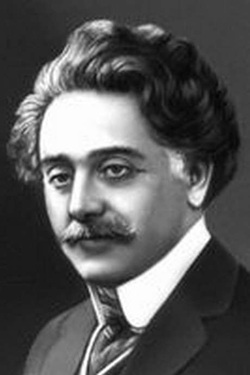 Aleksandr Shirvanzade (Movsesian)
Aleksandr Movsesian was born on April 18, 1858, into a tailor's family in the province of Shirvan, in what is now Azerbaijan, and later adopted the pen-name Shirvanzade (son of Shirvan). He brought to fruition the social realist school of Armenian drama promoted by Gabriel Sundukian a generation earlier. At the age of 17, Shirvanzade went to work in the Caspian city of Baku whose fortunes were beginning to rise with the boom in oil production. He immersed himself in Armenian and Russian literature as well as reading Stendahl, Balzac, Flaubert, Zola and Shakespeare, his greatest love. Working first as a clerk and then as an accountant for oil companies, Shirvanzade saw first-hand the social impact of industrialized oil production. He turned his shock and anger into a literature of protest, writing in many genres: novels, plays, short stories, and newspaper articles.

His later protests against the massacres perpetrated during 1894-96 against Armenians in the Ottoman Empire under Sultan Abdulhamid II resulted in his imprisonment in Tiflis, an experience which led to his masterpiece, Chaos (1896-97). Returning to Baku, he became increasingly interested in women's issues, as shown in his play Evgine about women's suffrage, and Did She Have the Right? Shirvanzade's concerns with capitalism and feminism fuse in his drama, For the Sake of Honor (1904). In 1916, Maxim Gorki wrote that Shirvanzade's works "were known and read not only in the Caucasus but also in England, in the Scandinavian Peninsula, and Italy." In his later years, Shirvanzade lived abroad, finally returning permanently to Yerevan in 1926. He died in Kislovodsk in 1935, and was buried in Yerevan. 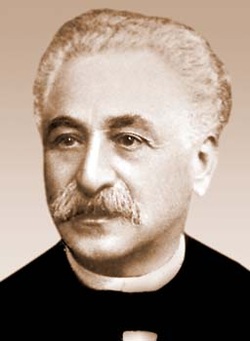 Gabriel Sundukian
Gabriel Sundukian is regarded as the founder of modern Armenian drama. Born in Tiflis on June 29, 1825, he learned both classical and modern Armenian, French, Italian and Russian, and trained at the University of St. Petersburg (1846-50) as an official translator for the Transcaucasian viceroyalty. While in St. Petersburg, Sundukian majored in Arabic, Turkish and Persian and wrote a dissertation on the principles of Persian versification. He also read widely in the works of Shakespeare, Schiller, and Hugo. He returned to Tiflis where he entered the civil service; he would spend the rest of his life there, with the exception of 1854-58 when he was banished to Derbend (Dagestan, Russia). In 1863 an Armenian theatre company opened in Tiflis where Sundukian’s first play, Sneezing at Night’s Good Luck, was staged.

In subsequent years a series of plays treating middle-class morality, marriage issues, and the impact of capitalism on personal relationships gained him a popular following to such an extent that he was often given standing ovations and carried home from the theatre on the shoulders of his fans. His play Pepo (1871), about a fisherman contending with changing business practices, is perhaps the most enduringly popular play in Armenian drama, and was made into the first Armenian talkie in 1935, directed by Hamo Beknazaryan. Sundukian worked as a dramatist until his death at the age of 85; just a few days before he died, he was correcting the proofs of a new comedy. Eleven years later, in 1922, the Armenian State Theatre in Yerevan was named the Sundukian Theatre in his honor.